Wisconsin Elections Commission Has ZERO Election Results On Its Website 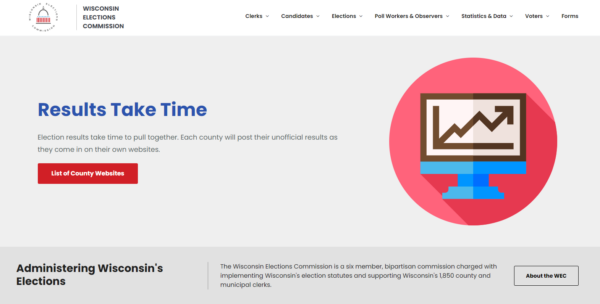 The Wisconsin Elections Commission (WEC), which was established in 2016 by the Wisconsin Legislature to administer elections, has posted no results whatsoever from the 2022 midterm general congressional election on Tuesday.

“Wisconsin does not have a statewide system for reporting unofficial results on Election Night, and there is no central official website or feed where results are reported,” the WEC states.

Four seats on the committee, two Democrats and two Republicans, are appointed by their respective Legislative leaders, while two spots are appointed directly by the Governor of Wisconsin. The WEC Commissioners serve for five-year staggered terms.

“State law requires that counties post the unofficial election night numbers for each polling place. The unofficial statewide and county results numbers that the public sees on Election Night and the days thereafter come from the news media, including the Associated Press, which collects them from the 72 county clerks’ websites,” the WEC declares.

In a video posted by the Wisconsin Elections Commission on October 22nd, 2020, the WEC makes the claim that Wisconsin’s election results always take far longer than election night to confirm.

“Accurate election results take time. The numbers you hear on election night aren’t actually official. In some communities counting ballots may take longer than normal. Even when their counts are complete, it always takes weeks for Wisconsin’s vote totals to be triple-checked and certified. That’s true no matter how many absentee ballots need to be counted,” the WEC asserts on its website.

“The task of counting absentee ballots begins as soon as the polls open on election day. That’s when municipal clerks deliver the sealed containers carrying their community’s absentee ballots to area counting locations. For most Wisconsin communities, that means your local polling place where ballots are counted with the same tested trustworthy equipment used by in-person voters. But for some communities, especially ones with a lot of local polling locations, it is more efficient to deliver absentee ballots and the reliable high-speed equipment used to count them to a central location.”

The WEC also makes the assertion that absentee votes are in fact counted in view of the public.

“Just like the ballots cast at polling places, absentee votes processed at a central counting location are sorted and counted in public, where election officials, inspectors, and observers can look out for every single vote,” the WEC video stated. “All across our state, those votes are tabulated by local election officials who are highly trained to make sure every in-person vote and mail-in ballot in their community is counted accurately, electronically, or by hand.”

“Even then, the carefully counted results they report on election night aren’t official yet. That’s because Wisconsin triple-checks every vote total for accuracy first. Election results aren’t official until they have been publicly reviewed and certified by three levels of government, starting with qualified inspectors at the municipal level, then verified by county election officials and finally certified by the State of Wisconsin’s Elections Commission,” the narrator in the WEC video declared.

“So you see, waiting for official results doesn’t mean there’s been a problem. Certifying election totals is a meticulous process that is specifically designed to protect every vote. Now you know why it takes time to deliver official election results everyone in Wisconsin can count on, no matter how many people vote absentee,” the WEC concluded in its 2020 video.