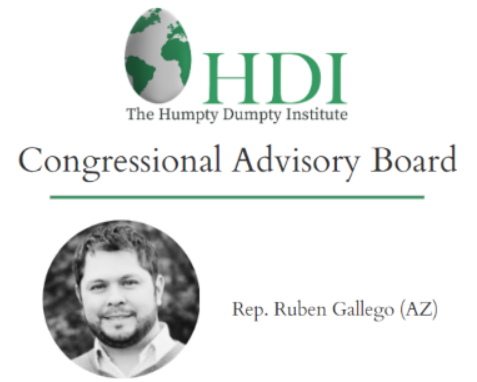 Democrat Rep. Ruben Gallego (AZ-3), who was just re-elected to Congress in 2022, has already announced his intentions to run for the Arizona US Senate seat currently held by Kyrsten Sinema, who recently changed her partisan affiliation from Democrat to Independent. National File can now report that Gallego is tied to the CCP-partnered, Epstein-linked Humpty Dumpty Institute, a notorious influence operation that’s been extensively covered by this publication.

Though he’s relatively new to Capitol Hill, Ruben Gallego has wasted no time in joining up with Washington’s uni-party establishment. The Arizona Democrat is already listed as a member of the Chinese Communist Party-tied, Epstein-connected Humpty Dumpty Institute’s “Congressional Advisory Board“, along with several other uni-party legislators.

National File has extensively reported on the Humpty Dumpty Institute’s ties to the Chinese Communist Party (CCP), its People’s Liberation Army (PLA), and other anti-American actors out of Israel and the former Soviet Union, among other corners of the world.

The group is even tied to Mark Epstein, the brother of dead globalist pedophile Jeffrey Epstein.

The Humpty Dumpty Institute, once run by the brother of late pedophile Jeffrey Epstein, has managed to stay largely out of the news despite its ties to the United Nations, US State Department, several members of Congress, global elite, and Chinese Communist Party. Jeffrey’s brother, Mark Epstein, was listed as a Director and main financier until at least 2019.

Functioning as a globalist influence operation, the Humpty Dumpty Institute has been a mainstay around the United Nations for roughly two decades, positioning itself as a middleman between international powers and holding “congressional staff delegations” at the UN, to bring the administrative side of Capitol Hill under its purview as well.

Much like other left-wing, globalist influence operations, the Humpty Dumpty Institute is deeply involved with Communist China, and its members have engaged in Maoist rituals with members of the CCP and its PLA.

In 2018, Humpty Dumpty Institute leadership joined other members of the CCP sphere at the Taihe Institute’s “Civilizations Forum,” to discuss how they’re promoting a Communist China-centric future.

Among those chairing the event was Irina Bokova, a former UN official and KGB agent with ties to Brazil’s recent contested election.

A direct arm of the CCP’s People’s Liberation Army, the Taihe Institute is a communist “think tank” in a longstanding partnership with the Humpty Dumpty Institute. Despite its public links to the Chinese military, Taihe even operates “research centers” in the United States and Germany.

Irina Bokova chaired the Taihe Institute’s “Civilizations Forum,” which was based on “the establishment of a community of a shared future for humankind,” centering around China’s Belt and Road initiative for economic dominance.

In attendance was the Epstein-directed Humpty Dumpty Institute’s Joseph Merante, who provided updates on how HDI, a close Taihe partner group, was promoting the forum’s CCP agenda.

Though they’ve never admitted it, the Humpty Dumpty Institute appears to operate similarly to the World Economic Forum, while taking a more behind-the-scenes approach to geopolitical manipulation as they move to “capture” various members of government.

Currently, multiple members of Congress, of both parties, appear to have been “captured” by the globalist outfit, which also has direct links to the Biden Administration.

Joe Biden’s Ambassador to Malta, Constance Milstein, is a founding member of the Humpty Dumpty Institute.

Despite the group’s rather public ties to the Chinese Communist Party and its military apparatus, sitting members of Congress have refused to act, including one self-proclaimed member of the America First movement.

View the chart below to see the massive globalist web that the Humpty Dumpty Institute and its CCP partners have spun: