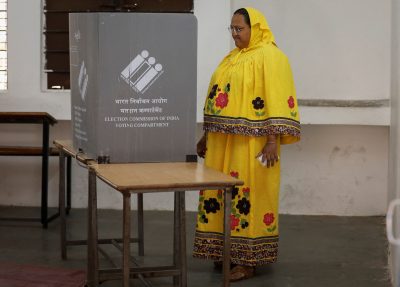 As India braces for winter, the electoral heat is rising in the poll-bound states of Gujarat and Himachal Pradesh. Both states have been governed by the Bharatiya Janata Party (BJP) since the 2017 state assembly elections.

Gujarat, the laboratory of the Hindu nationalist ideology of Hindutva and the home state of Indian Prime Minister Narendra Modi and Home Minister Amit Shah, has been governed by the BJP since 1995. Himachal Pradesh has witnessed alternating governments led by the BJP and the Indian National Congress (INC) since the 1990s.

The BJP’s well-oiled organisational structure and electoral machinery, backed by active support from the Rashtriya Swayamsevak Sangh — a Hindu nationalist paramilitary volunteer organisation — may prove to be a major advantage.

The INC, plagued by factionalism and infighting, has been beleaguered by significant defections in Gujarat. Alpesh Thakor and Hardik Patel, who steered the party to its best performance in decades at the 2017 state election, have quit. Recent jolts in Himachal Pradesh, including the exit of working president Harsh Mahajan and several sitting legislators, add to the setbacks suffered since the death of veteran politician Virbhadra Singh in 2021.

The BJP has experienced poor state-level results when compared to its sweeps of India’s national parliament, the Lok Sabha. The economic pains of high inflation and unemployment have combined with the BJP’s lacklustre administrative record. Several ministers face serious criminal charges, which are likely to hurt the ruling party’s chances.

But surveys conducted in October 2022 show that nearly two thirds of respondents still express complete or partial satisfaction with the performance of the BJP.

In an era of personality-driven politics, leadership can make or break electoral fortunes. The leadership void in the opposition camp remains stark. Top INC figures, such as the Gandhi family, have been largely absent from the campaign trail, and the party is banking on the legacy of former chief ministers Madhavsinh Solanki and Virbhadra Singh to regain lost ground.

AAP National Convener Arvind Kejriwal has hit the campaign trail promising to extend his ‘Delhi Model’ with promises of free water, electricity, healthcare and education. But the more indigenous ‘Gujarat Model’ is working to the BJP’s advantage in the western state.

In line with the politics of the ‘cow belt’ — a region of northern India characterised by strict adherence to conservative Hinduism — the AAP has promised payments to cattle farmers and pledged to extend provisions for the administration of tribal areas in the southern districts of Gujarat. This is likely an attempt to strike a chord with the tribal community, who constitute 15 per cent of the state’s electorate, while the BJP seems busy wooing the Paharis and Hattis, ethnic groups that may play a decisive role in the Himalayan region.

Both states have a similar demographic makeup, with Hindus constituting around 90 per cent of the population and Muslims being the largest minority. Gujarat houses the highest proportion of Jains in the country who, though they make up a tiny minority of the population, wield significant political influence in urban areas. This diversity impacts not only the parties’ electoral prospects but also their strategy and choice of leadership.

Post-2017, the BJP largely seems to have held on to its vote share as the INC has witnessed waning support. The entry of a third party, the AAP, promising a ‘new dawn’, is largely expected to cut into the anti-incumbent vote. This may spoil the INC’s ambitions of staging a political comeback.

The March 2022 Goa elections are an indicator of how a divided opposition can bolster the ruling party’s chances. A series of opinion polls including an ABP-CVoter survey confirm that this could well be the case in the 2022 elections. The polls project that in Gujarat the incumbent BJP will win in a landslide and triumph even in closely contested Himachal Pradesh.

As the BJP’s saffron juggernaut aims to hold onto power in Gujarat for a sixth straight term and retain Himachal Pradesh, the opposition knows that it needs to make a dent in the 30 odd seats in the Lok Sabha that the BJP holds in these states should it aim for a comeback at the national level in 2024.

For the INC, another straight defeat after washouts in Uttar Pradesh, Uttarakhand, Manipur and Goa and a humiliating loss in Punjab to the AAP will only dampen its morale. While the BJP seeks to show its dominance in Gujarat and Himachal Pradesh, it remains a struggle for survival for the INC. The elections will also be a trial of AAP’s emergence as a potent political alternative. As for the project of opposition unity, this is a story that only 2024 will tell.

Soumyadeep Chowdhury is a postgraduate candidate in political science at St Xavier’s College, University of Calcutta.