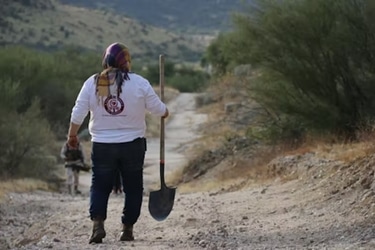 Five madres buscadoras, women searching for their disappeared relatives, have been murdered in Mexico so far this year. Government promises to aid them, protect them, and fund them have never materialized, but these groups are becoming more frequent targets for organized crime.

With over 100,000 people in Mexico listed as missing, the work of these collectives to find their loved ones is arduous. To learn more, InSight Crime sat down with representatives of two groups, Lucy Díaz Genao, founder of Colectivo Solecitos (Sunshine Collective) in the eastern state of Veracruz; and María Luisa Núñez Barojas, founder of Colectivo Voz de los Desaparecidos (Voice of the Disappeared Collective) in the central state of Puebla.

Both women founded their organizations after feeling abandoned by authorities. They face similar struggles in states with a strong presence of organized crime, they work autonomously with no state support, and they fund their explorations through their members’ fundraising efforts.

Lucy Díaz Genao’s son was kidnapped nine years ago, and although she paid the ransom, he never returned. She created Colectivo Solecitos in 2014, which has now become a reference for this kind of work in Mexico. María Luisa Núñez Barojas founded her collective in 2018, a year after her son vanished and was never found.

InSight Crime (IC): What were your motivations for acting autonomously and obtaining your own funding?

María Luisa Núñez Barojas: We act altruistically through the efforts and resources of each family member. We are totally independent of the government, of political parties, and of any other organization, association, or collective in the country. We act on our own because it is important to us that our genuine struggle is not politicized or distorted.

Lucy Díaz Genao: When the state gives you something, the state tells you what to do and sends you where it wants. When we started the search at Colinas de Santa Fe [a town in northern Veracruz where Mexico’s biggest mass grave was found in 2019], we found nothing for the first five days because our hands were tied — they [the authorities] were telling us how to conduct the search. But the day we demanded to search on our own, we began to find the bodies. I remember that I was one of the first to find the first bones.

IC: The searches you carry out require time, planning, and enormous will. How do you organize and prepare your missions?

MLNB: Whether we are searching for people who are dead or alive, we search when more members are available to participate. We divide tasks up, according to that availability. Workshops are important as they help us analyze the location we will search and whether specific precautions need to be taken.

LDG: The search brigade within the collective is practically independent and operates largely autonomously. One person directs it, decides where to go, what is going to be done, who is going to help search, and who will establish contact with authorities. We have to go with the authorities because the law governing the handling of bodies in Veracruz is very strict. We cannot handle bodies without authorities present.

MLNB: We do what we do because of the complete indifference and lack of effort by authorities. We have to do the work of the state, and this puts us at risk. The state has totally abandoned the families [of missing persons], and it is not interested in us doing its job. We, as family members, manage to create effective lines of investigation. We identify and locate perpetrators who attack searchers. No mother should be killed for searching for her loved ones.

LDG: That so many have died is terrible, it is appalling. There are cases in which mothers are killed in the same situation as those that led to the disappearance of the loved one because the perpetrators do not want the search to be carried out. In many cases, those behind the crimes are the same.

IC: These complaints add to accusations that President Andrés Manuel López Obrador (AMLO) has not delivered on promises concerning madres buscadoras. Given this failure, what precautions are you taking?

MLNB: Aggressions and intimidations have come from state police and municipal police since they are often in collusion with organized crime.

Families have been displaced after receiving threats for carrying out searches. Family members have suffered “incidents” that, according to all indications, were not casual or random. They occurred precisely at the moment a search or investigation was reactivated. We take extreme precautions. We have already requested protection measures from the Attorney General’s Office after one colleague was murdered [Blanca Esmeralda Gallardo was shot dead on October 4, 2022 in Villa Frontera, the same town where her daughter disappeared two years earlier.]

LDG: What we did to be able to continue searching was to publicly say that “we are not looking for guilty parties, we just want to find our children.” We were then left alone.

IC: Do you think there is a direct link between organized crime and those who attack madres buscadoras?

MLNB: Yes, we believe so. Disappearances normally occur at the hands of organized crime, regardless of the activity they are involved in, including kidnapping, highway robbery and assault, sex trafficking, or drug trafficking.

LDB: It all comes from the same complicities. What is happening in Mexico is a gigantic tragedy, a humanitarian catastrophe. One man who killed a boy whose remains we found told his mother that her son had learned more than he should about some bad things, and that’s why they took him out.

IC: President Andrés Manuel López Obrador has promised to support your searches and to prosecute those attacking you. Have you observed any meaningful differences?

MLNB: No difference or improvement has been observed or felt because the responsibility lies with each state government. In the case of Puebla, the governor [Miguel Barbosa] is not interested in solving the problem. He has never wanted to listen to us, despite the fact that we have asked him to do so on several occasions, both publicly and in writing. The federal government does have economic resources to help search for the disappeared. But these resources go to the state governments, and they decide how to spend them. In Puebla, this has not translated into effective investigations or real searches.

LDG: There are some attempts to protect people who search, but not all states do it equally. There are states where we are unprotected. Laws on forced disappearances are not enforced evenly. Budgets are not assigned, and some states have not dealt with the issue. In Veracruz, we have very good support. But the states with the worst levels of disappearances are those where those who search don’t get a penny.

SEE ALSO: Mothers Searching for Loved Ones in Mexico Abandoned by Authorities

IC: From your experience running a collective, what are the main concerns for such groups at the moment? How would government support help you be more efficient?

MLNB: Investigations are not advancing. Individual cases are not being treated as they should, and families lack the resources to go out and search. Additionally, there is a high level of insecurity and distrust in institutions that watch us, harass us, and intimidate us. We know that the government of Puebla [capital of the state of the same name] has infiltrated other groups.

LDG: I hope the government decides to remodel Mexico’s security landscape and the search for the disappeared. I hope they are willing to make substantial changes.

IC: What do you expect to see in the future? What can we expect from the president’s promises?

MLNB: In Puebla, we see that AMLO’s promises are not being fulfilled. The immediate future is bleak: as long as Governor Miguel Barbosa stays in office, things will not get better. We hope to continue fighting. We are preparing to keep searching, and we are educating ourselves in law to be able to defend what we ask for in the investigations. We continue with our main objective: finding our loved ones.

LDG: The future is quite complicated, and we do not see anything that indicates it is going to change. We see the same vices continuing. We always take promises with a lot of skepticism. We have been doing this for many years. Hope does not die, but hope that depends on others does die. As long as we are looking for our loved ones, they will appear. That is clear to me. We cannot give up.