Has Moscow Patriarch Kirill Given The Greenlight To Russian President Putin On The Use Of Nuclear Weapons? 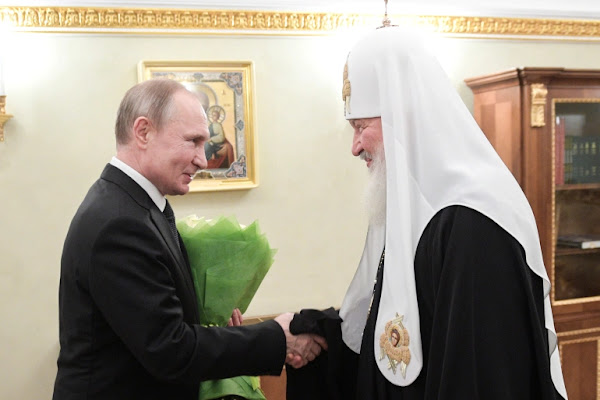 * Russia “fully reaffirms” its commitment to avoid nuclear war, according to foreign ministry

Patriarch Kirill, the head of the Russian Orthodox Church, warned the public that their country’s existence is under threat.

Kirill made the statement after the consecration of the temple of the National Guard in Balashikha, Moscow, on Sunday. The priest called for intensified prayers “for the authorities and the Armed Forces,” claiming growing threats against Russia.

He added that the army should not be “mechanical”.

“We must not ignore these petitions, especially when people face dangers — dangers that challenge the very existence of our country,” the patriarch said, per Russian news agency Interfax.

Update #1: Patriarch Kirill declares the very existence of Russia under threat, as set out in Russias nuclear doctrine (Ukrayinska Pravda)

WNU editor: Religion plays a very important role for a majority of Russians. In particular with the generation that was born after the fall of the Soviet Union. My cousins in Moscow were never religious, but since the start of the war they are going to church every Sunday. They tell me the pews are packed.

That is why Moscow Patriarch Kirill’s declaration that the very existence of Russia is now under threat is very concerning. A lot of people get their spiritual guidance from him. Including a lot of people in the Kremlin.

So why the concern over this remark on Russia’s existence by a Russian spiritual leader?

Russian nuclear doctrine is very straightforward. Nuclear weapons can only be used if the existence of Russia is under threat, and Moscow Patriarch Kirill just said the country’s existence is under threat.

On a side note. Former Russian President Medvedev is now in the habit of using religion to defend Russia’s war in Ukraine …. Russia Fighting ‘Sacred’ Battle Against Satan, Medvedev Says (RFE).

One more side note. Canada has banned Moscow Patriarch Kirill from entering Canada. This is the first time that I know of a major spiritual leader being banned from this country.

On a personal note. I am Russian Orthodox. When I was young I was never religious. But that changed when I met Aleksandr Solzhenitsyn at Montreal’s main Orthodox church in the east end when I was working for the UN (Solzhenitsyn was living in Vermont at the time, and he would regularly cross the border to go to our church and meet our arch-bishop). Let us just say that meeting him was always a profound experience. And while I was not a fan of his brand of hard-core Russian nationalism , when it came to religion he was a spiritual revelation to me.