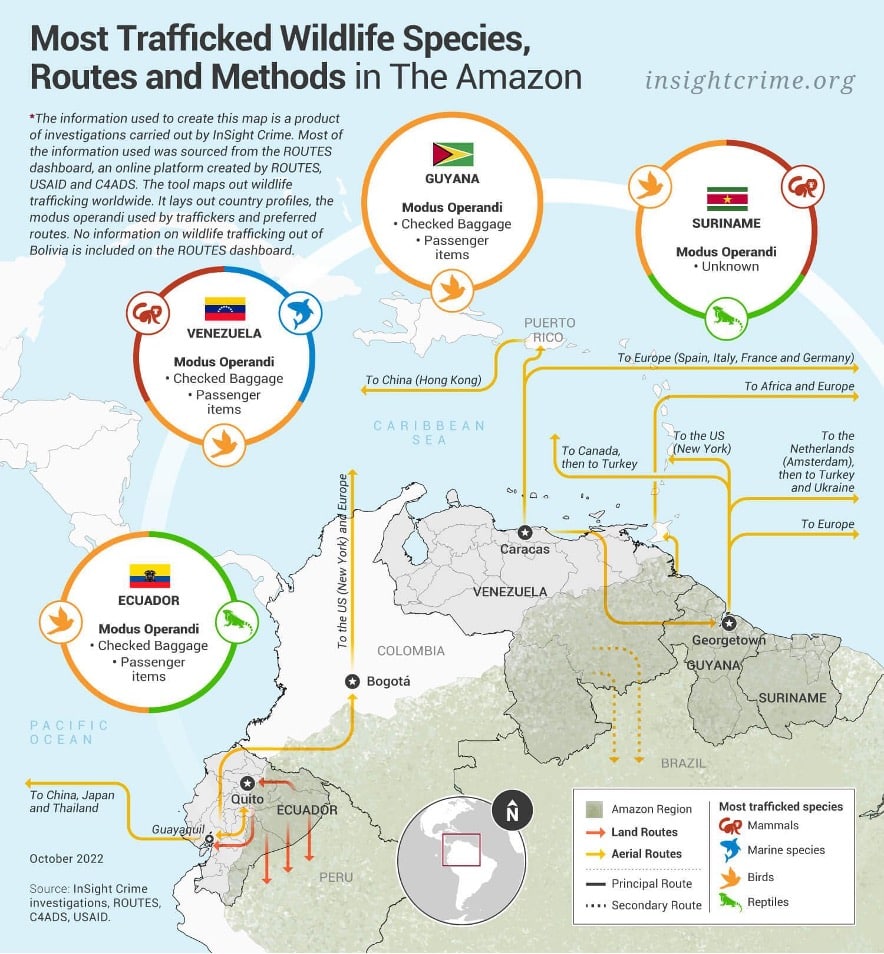 As a result, the region is a hub for wildlife trafficking. Thriving demand for animals and their parts threatens hundreds of thousands of birds, reptiles, and mammals.

Birds — including parrots, macaws, and songbirds — are most commonly trafficked. Their bright colors and intelligence mean criminal networks are keen to ensnare them, largely to feed the illegal pet trade, where demand is high. Others are killed so their body parts can be traded.

Reptiles, including green iguanas and snakes, are also sought after for the pet trade. Meanwhile, alligators are hunted for their skins. Turtle shells are trafficked out of the Amazon to be sold as decorations in Asian markets, while turtle eggs are eaten as delicacies.

Jaguars are killed for their skins and fangs. And their body parts are blended into a paste used in traditional Chinese medicine.

Much like in Colombia and Peru, wildlife trafficking in our countries of study unfolds through three main phases across the region: extraction, transportation/transformation (laundering), and commercialization.

First, members of local communities across the Amazon are hired by criminal networks to capture or kill in-demand species. In Bolivia, jaguars, macaws, and caimans are targeted. Meanwhile, red and green macaws, yellow-shouldered and yellow-crowned parrots are caught in Venezuela’s Amazon. In Ecuador, turtles, parrots, and monkeys are trapped, while songbirds are ensnared and jaguars killed in Guyana and Suriname.

Songbirds like the Towa-Towa are one of the most targeted species that feed the internal and international market. Like in other Amazon countries, songbirds in Guyana are requested for whistling competitions. These irregular competitions take place in Georgetown, where the captivity and trafficking of these species are poorly monitored.

Macaw species are also a priority target for traffickers. In the legal and illegal markets, macaw prices vary by their color. In legal operations, green macaws are sold for between $200-250; blue macaws vary in price from $275-300; and red macaws reach prices of $400. However, the illegal market doubles their value. Traffickers can sell red macaws for almost $1,400 and blue macaws for $700.

Whether dead or alive, animals and their parts are then transported onward. According to WWF, “the remote borders between Amazon countries are ideal places for traffickers to export wild animals.” Songbirds are often moved from Guyana to Suriname’s capital, Paramaribo. Tropical birds captured in Ecuador’s Amazon are moved into Peru or Colombia in small vehicles that are rarely checked by authorities.

Before, following, or during transit, illegally captured animals and their parts are “laundered,” often through breeding farms and falsified documentation. This provides a guise of legality, after which they can be sold.

Mammals, birds, and marine species that reach Venezuela’s capital city of Caracas from its Amazon region head to France, Puerto Rico, Guyana, Brazil, Spain, Austria, Germany, and Italy. Birds leaving Venezuela are also moved via transit points such as the Caribbean nation of Trinidad and Tobago.

Wildlife trafficked out of Guyana reaches a host of nations. Songbirds and other exotic birds have been found at customs offices in the United States and Canada, and en route from Guyana to Japan. Meanwhile, jaguar parts and turtles sourced from across the region reach Asia.

Otherwise, creatures are sold domestically in squares, urban markets, pet shops, or parks across the Amazon, according to Julia Salvador at Wildlife Conservation Society (WCS) Ecuador. Tropical birds caught in Ecuador’s Amazon are sold in pet shops in urban centers. Red-masked parakeets are illegally sold in stores along the border with Peru. In Suriname and Guyana, birds that remain in the country are traded at markets found in town squares. Social media may be used to facilitate these transactions, Salvador explained.

While wildlife trafficking is often considered a “disorganized crime,” a number of actors are involved in the trade. These include entrepreneurial criminal networks, legal actors, and cheap labor.

Entrepreneurial criminal networks coordinate and finance wildlife trafficking across our countries of study. They rely on the support of intermediaries to source, transport, launder, and sell animals and their parts.

Brokers connect local labor forces with organized criminal networks dealing in the Amazon’s illegal wildlife trade. These intermediaries, who have ties to regional or international networks, travel between communities in search of species in demand. Criminal networks and entrepreneurs focused on bird trafficking in Ecuador’s Amazon employ brokers to track down valuable species of exotic birds, which then are sent to Colombia or Peru.

Julia Salvador, at WCS Ecuador, explained that brokers often contact members of local Indigenous communities across the Amazon to buy animals from them at an extremely low price. They then sell them to exporters for a significantly higher price, according to Salvador.

Legal actors — including breeding farms and zoos — also facilitate wildlife trafficking across our countries of study. The origins of illegally captured wildlife are covered up through these institutions. Certificates claiming the animals were born in captivity allow them to be exported in many cases.

These actors may maintain direct or indirect ties to criminal networks and entrepreneurs. In Ecuador, some networks work through brokers to sell species taken out of the Amazon through pet stores in cities such as Guayaquil. Exotic birds trapped in Guyana and Suriname are also sold through pet stores or in urban markets.

Breeding farms may also have ties to wildlife trafficking. While these organizations have been celebrated for their role in repopulating habitats with endangered wildlife, some have faced allegations of corruption.

Reptile traders in Guyana and Suriname use falsified documentation to traffic reptile skins. This paperwork fails to correctly declare which species are traded and how many reptiles traders possess.

In most cases, a labor force is employed to remove animals from their habitats. It often consists of “poachers” and “catchers,” who are most often local people living close to the natural habitats of river turtles, parrots, jaguars, monkeys, and other prized fauna. They are contacted by brokers — often working on behalf of entrepreneurial criminal networks — to catch or kill wildlife.

Locals employed as hunters and catchers are familiar with habitats, tracking, and trapping techniques. They often get involved in the trade due to a lack of economic alternatives. “Local villagers with few opportunities to make an income may turn to wildlife trafficking as a means of survival,” jaguar researcher Vanessa Kadosoe revealed. Julia Salvador from WCS Ecuador agreed.

Ranchers, miners, loggers, and farmers across the region hunt and sell fauna to supplement their income. They act opportunistically, without a formal buyer lined up, knowing they will always be able to sell in-demand creatures to somebody.

Nonetheless, poachers and catchers receive low pay for their efforts and sit at the bottom of the chain. In 2016, Karen Noboa, an official working for the Wildlife Unit of Ecuador’s National Biodiversity Agency, revealed that when a creature taken out of the nation’s Amazon region reaches its international destination, it is often commercialized for a price ten or twenty times higher than that paid to the person who originally poached it.

*Nienke Laan, Julian Lovregio, Isaac Norris, and Scott Mistler-Ferguson contributed to the reporting for this article.

InSight Crime has partnered with the Igarapé Institute – an independent think tank headquartered in Brazil, that focuses on emerging development, security and climate issues – to trace the environmental crimes and criminal actors driving deforestation across the Amazon. See the investigations.