Yoon stumbles between Beijing and Washington 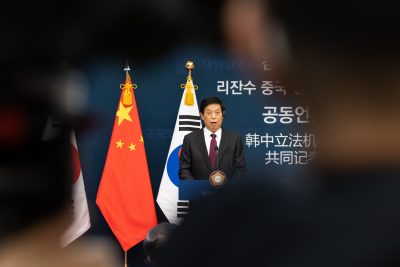 South Korean President Yoon Suk-yeol is feeling the heat of the recent restrictions by the US Department of Commerce on technology exports to China. While the export controls could hamstring South Korea’s lucrative semiconductor industry, they are emblematic of a larger issue — that balancing between the United States and China is becoming more difficult for Seoul.

It may not matter that South Korea was granted a one-year amnesty on semiconductor exports to China. In an increasingly bipolar world, Yoon is likely not up to the task of balancing engagement with China.

South Korea’s proclivity for balancing its security engagement with Washington and economic engagement with Beijing met a harsh reality in 2016 during the Moon presidency. Moon Jae-in was elected president during a high point in ROK–China relations. But when Seoul procured the US-made Terminal High Altitude Area Defence (THAAD) missile defence system, Beijing retaliated.

Concerned over Washington’s sphere of influence and the potential for THAAD’s radar to be extended into Chinese territory, Beijing imposed a series of unofficial sanctions and tariffs on big-ticket South Korean exports, cultural goods and the tourism industry. Six years later, the South Korean economy still suffers from China’s retribution.

Yoon ran as a pro-Washington China hawk but recently signalled his desire to cooperate with Beijing, stating that close communication was needed to ensure that the THAAD does not affect ties. Some viewed his snubbing of the Speaker of the US House of Representatives, Nancy Pelosi, during her 2022 visit as a goodwill gesture to Beijing. But Yoon had no experience in politics before becoming president. If the more experienced Moon had trouble navigating China, Yoon has his work cut out for him.

Despite being granted a one-year moratorium on semiconductor exports, pressure is mounting on Seoul to join the Washington-led Chips 4 Alliance — a push to build a semiconductor supply-chain cooperative between Taiwan, the United States, Japan and South Korea that excludes China. Beijing has threatened retaliation should South Korea join the initiative.

While Seoul has been tight-lipped over its intentions, it joined the preliminary Chips 4 meeting with Taiwan and Japan in September 2022. Some domestic commentators argue that Seoul should confine engagement with Chips 4 to a track-1 dialogue without letting the group dictate the activities of South Korean corporations.

The winds of realpolitik are not in Yoon’s favour. His cabinet includes members like Minister of Economic Security Wang Yun-jong — an outspoken China hawk whose opinions are influential among Yoon’s foreign policymakers. Yoon’s bloc, the People’s Power Party, is staunchly pro-Washington.

Some of Yoon’s presidential campaign promises were certain to antagonise Beijing, including the procurement of more anti-missile weapons and engagement with the Quad. It will be difficult for him to renege on such pledges when engagement with China is a highly partisan and important issue to voters. The Asan Institute’s yearly public opinion survey found that South Korean views of Beijing have declined since the THAAD controversy — they view China more negatively than North Korea.

Yoon’s profound lack of diplomatic know-how won’t help. Framing his neglect of Pelosi as a move to placate Beijing seemed an obvious explanation. But the confusing messaging from the Office of the President following the snub, combined with evidence that Yoon had been on a staycation, drinking and socialising a short car ride away from Pelosi, signals it was most likely a failure of diplomacy.

More blunders occurred during Yoon’s September 2022 overseas tour. The trip first saw him head to the United Kingdom for Queen Elizabeth II’s funeral, where he failed to pay his respects to the Queen. Yoon blamed traffic, yet it later emerged that the President had missed the event because he ‘was hungry’.

Yoon then arrived in New York to address the United Nations General Assembly. The brief bilateral discussion he held with Japanese Prime Minister Fumio Kishida on the sidelines was a positive step in South Korea–Japan relations. Even that small victory was nearly torpedoed as Seoul had unilaterally announced the meeting without prior discussion with Tokyo, catching Kishida off-guard and tempting the Japanese Prime Minister to skip it entirely.

Yoon then spoke with US President Joe Biden regarding Washington’s ratification of the Inflation Reduction Act. He was soon overheard on a hot mic referring to the US Congress with a word that translates to anything from ‘idiot’ to much harsher expletives.

Yoon’s dearth of diplomatic savvy has confused otherwise straightforward interactions — and engagement with Beijing is anything but straightforward. That and domestic factors bode poorly for Yoon’s attempts to navigate US–China competition.

With his approval ratings crumbling, Yoon cannot afford to look soft on China but will certainly invite renewed animosity should he continue his engagement with US-led initiatives such as the Chips 4 Alliance. The administration has a rough road ahead.

Daniel Mitchum is an Asian politics research analyst based in New York who specialises in great power politics, the Korean Peninsula and Indo–Pacific relations.