Amazon Rainforest Under Attack From All Sides 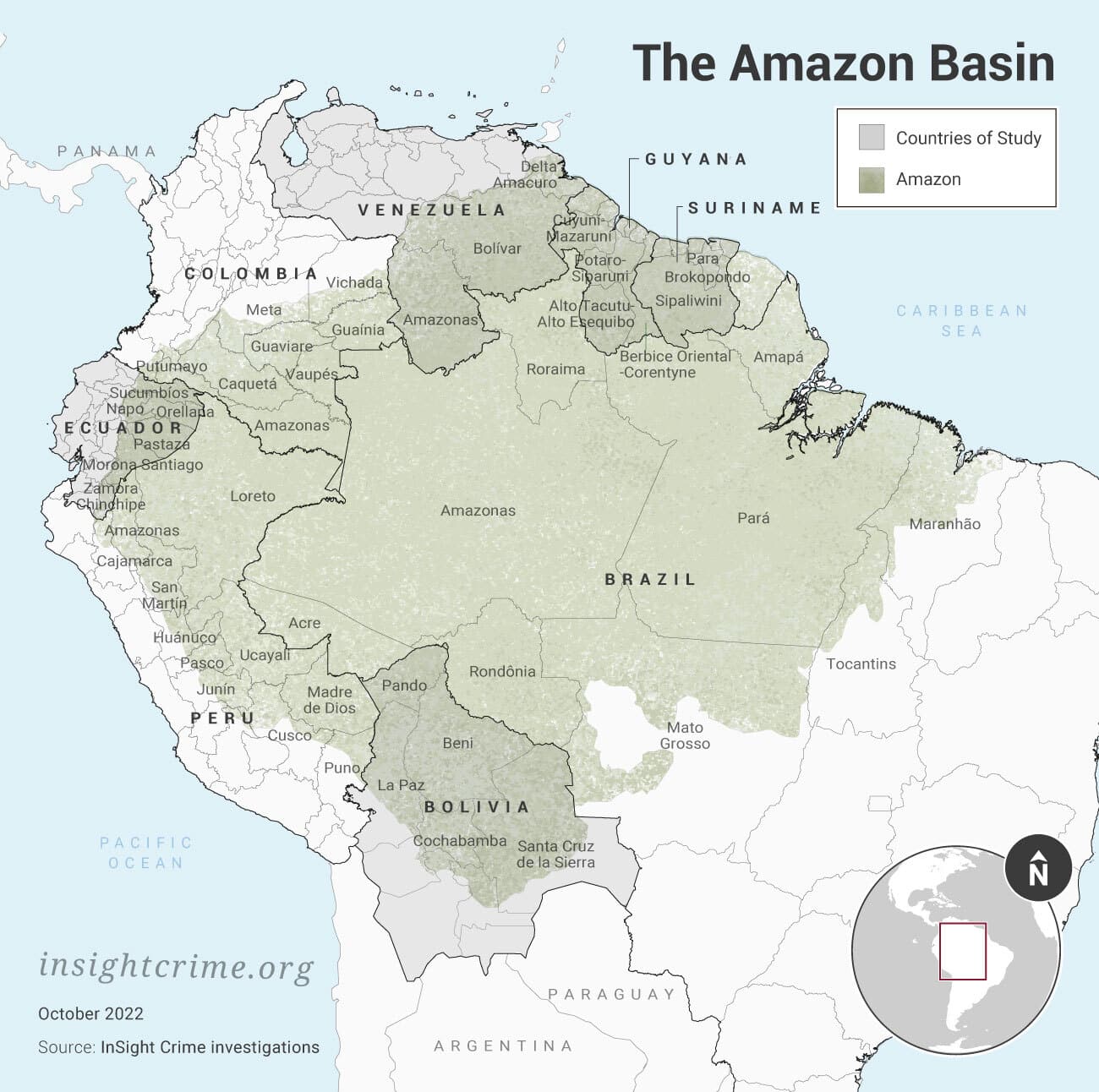 The Amazon Basin is being cut down at an accelerating rate. Environmental crime is driving soaring deforestation and has created a situation where today, some parts of the Amazon are emitting more carbon dioxide than they absorb.

This report unpacks environmental crime in the Amazon regions of Bolivia, Venezuela, Ecuador, Guyana, and Suriname. It is the product of one year of open-source and field investigation, including desktop research, telephone and face-to-face interviews with environmental experts, government officials, law enforcement, academics, and others.

These five countries make up around 20 percent of the Amazon. Combined, they are home to 91 different Indigenous communities.

In Venezuela, three southern states make up the country’s Amazon region: Bolívar, Delta Amacuro, and Amazonas. Bolívar is home to around one-third of the country’s forests.

Ecuador’s Amazon region encompasses just two percent of the Amazon, though it is home to one of the world’s last high-biodiversity wilderness areas: the Yasuní National Park. Six eastern provinces make up its Amazon region. These include Sucumbíos to the north; Napo, Orellana, and Pastaza in the center; and Morona Santiago and Zamora Chinchipe to the south.

Around 98 percent of Guyana is classed as being part of the Amazon. Approximately three-quarters of the nation is covered by forest.

Similarly, over 90 percent of Suriname forms part of the Amazon. Its three southern districts of Para, Brokopondo, and Sipaliwini are all part of the region. The largest of all three, Sipaliwini, covers around three-quarters of Suriname’s total national territory.

The information gathered has been used to develop a picture of how environmental crime works; the actors involved; how it overlaps with legal economies and different types of criminal activities; and what governments are doing to curb deforestation and its drivers. The report concludes with some opportunities for intervention.

The Amazon Basin encompasses an impressive share of the world’s known biodiversity. The giant forest plays a key role as a storehouse of carbon. This carbon sink, however, is in decline as trees are being cut down at a faster rate.

According to Global Forest Watch, an online platform that regularly monitors deforestation worldwide using a standardized methodology, our five countries of study combined lost more than 10 million hectares of tree cover between 2001 and 2021. This equates to the whole of Portugal being cut down.

The Amazon forests are facing a double risk. As criminal groups diversify across the region, no longer solely dependent on the drug trade, they are finding more opportunities in a range of environmental crimes, including timber trafficking, illegal mining, and wildlife trafficking.

Meanwhile, governments in the Amazon region have struggled to find a balance between economic development and environmental protection. The surging demand for commodities, such as beef and palm oil, and the resulting expansion of the agribusiness frontier into the Amazon have put pressure on forests and local communities.

The different challenges that the five countries of study face — including those related to the pandemic, insecurity, or political and criminal chaos — have overshadowed the protection of the Amazon. The lack of adequate resources and cohesion between these nations further spurs rampant deforestation, habitat destruction, and biodiversity loss.

As in Peru and Colombia, the main actors involved in environmental crime in these countries fall into the categories of entrepreneurial criminal networks, Non-State Armed Groups (NSAGs), cheap labor, and legal actors, such as corrupt state authorities or legally registered companies that also play a part in facilitating these crimes.

In Venezuela, due to the presence of NSAGs, the involvement of these actors in illegal mining is prevalent. In others, environmental damage is encouraged by governments, as is the case of agriculture in Bolivia and Ecuador. However, they are frequently associated with illegal acts, like land grabbing or uncontrolled fires to clear land.

While the main motors of deforestation vary from country to country, one driver is common throughout the region: illegal gold mining. The illegal mining boom took off in the neighboring countries of Colombia and Peru. The lucrative profits and the criminal dynamics that emerged there provided a blueprint for its expansion into Brazil, Bolivia, Ecuador, Venezuela, Guyana, and Suriname.

In the wake of Venezuela’s hyperinflation and economic woes, the regime of President Nicolás Maduro relied on its gold reserves to prop up its spending. The illegal gold proceeds have strengthened corrupt state officials and NSAGs present in the country, from the ex-Farc mafia, dissidents from the Revolutionary Armed Forces of Colombia (Fuerzas Armadas Revolucionarias de Colombia – FARC), to local criminal groups known as “sindicatos.”

Guyana’s mining scene is dominated by a small number of companies that hold the titles to large swaths of land, allowing small- and medium-scale miners to operate on their concessions for a fee.

To the east, Suriname’s gold mining dynamics are even more concentrated. Two international companies, which bring in a mix of local and international labor to operate on their concessions, are in control of access to much of the country’s mineral wealth.

SEE ALSO: A Cultural Occupation: The Guerrillas and the Indigenous in Venezuela’s Amazon

In both countries, small-scale illegal miners drive demand for mercury, which contaminates the surrounding environment and water sources when used to separate gold particles.

In Ecuador, illegal miners encroach on legal industrial mining sites. Meanwhile, in Bolivia, mining cooperatives work beyond their limits or without permits.

The region is also a hub for wildlife trafficking. Thriving demand for animals and their parts threatens hundreds of thousands of birds, reptiles, and mammals. Jaguars are ensnared for their skulls, skins, and fangs. Jaguar parts are sent to China by plane or through postal services. There, these are often passed off and sold as tiger products, which are prized for medicinal purposes and clothing.

Unlike in Colombia — where the ex-FARC mafia have played a large role in illegal mining, land grabbing linked to cattle and agricultural activities, and coca cultivation — NSAGs play a lesser role in these countries of study. Aside from Venezuela, where NSAGs are heavily involved in illegal mining, the main players in these countries are entrepreneurial criminal networks connected to timber trafficking, mining, and wildlife trafficking.

In order to halt climate change, world leaders gathered in Glasgow, Scotland for the COP26 Climate Summit in November 2021. More than 100 countries pledged their commitment to rein in global deforestation by 2030. The abstention of Bolivia and Venezuela, two of the nations with the highest rates of deforestation in the Amazon, points to a larger issue that has hampered efforts to tackle deforestation and the environmental crimes fueling it in the region: weak regional cohesion.

Regional initiatives aimed at tackling environmental justice issues have been established, such as the Escazú Agreement. However, these have been overshadowed as the Amazon countries have never marched together when it comes to protecting the Amazon. National interests have prevailed over regional ones. Diplomatic rivalries and economic development agendas have routinely taken precedence over the protection of the Amazon. Furthermore, corruption has acted as a firm barrier against the synchronization of efforts and must be rigorously addressed.

InSight Crime has partnered with the Igarapé Institute – an independent think tank headquartered in Brazil, that focuses on emerging development, security, and climate issues – to trace the environmental crimes and criminal actors driving deforestation across the Amazon. See the investigations.