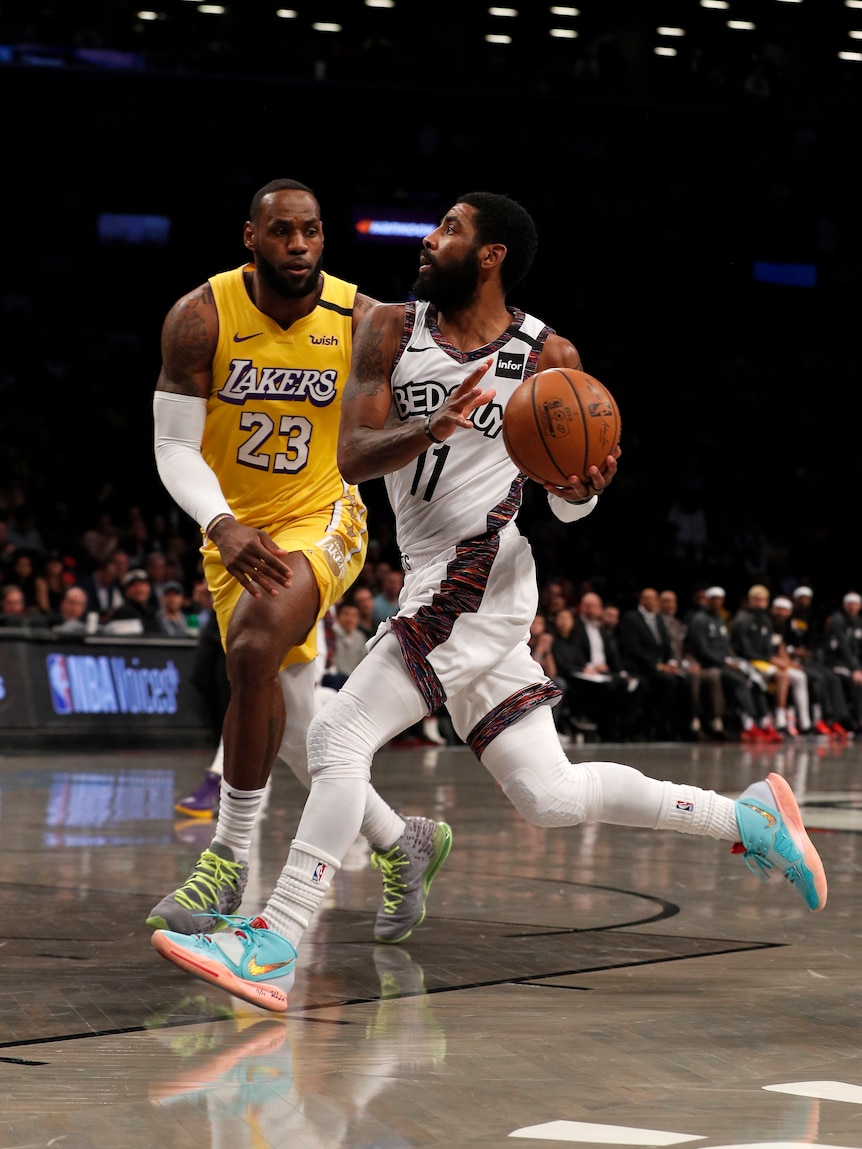 NBA great LeBron James says former teammate Kyrie Irving is being asked to jump through too many hoops to get back on the floor after he was suspended for promoting an anti-Semitic movie.

Irving was suspended by the Brooklyn Nets after posting a link to the movie on social media, and refusing to denounce the messages within it despite being given many opportunities.

The 30-year-old eventually apologised just hours after the Nets handed down a suspension of at least five games.

“Kyrie will serve a suspension without pay until he satisfies a series of objective remedial measures that address the harmful impact of his conduct,” the team said in a statement.

A couple of days later, The Athletic’s Shams Charania reported what those measures were, including donating to charities, meetings with Jewish leaders and undertaking sensitivity training.

And James, who won a championship alongside Irving in Cleveland in 2016, said it was “excessive”.

“I don’t believe in sharing hurtful information. And I’ll continue to be that way but Kyrie apologised and he should be able to play,” James wrote on Twitter.

“That’s what I think. It’s that simple. Help him learn but he should be playing.

“What he’s asked to do to get back on the floor I think is excessive [in my opinion]. He’s not the person that’s being portrayed of him.”

There has been some criticism that Irving is being treated more harshly than some other people who have been embroiled in discriminatory controversies in the past.

Team owner Donald Sterling made billions of dollars from selling the LA Clippers after he was expelled from the league for making racist comments about black people.

Phoenix Suns owner Robert Sarver is also looking to sell his team after being suspended for a year and fined following an investigation that found he engaged in “workplace misconduct and organisational deficiencies”, including making racist and sexist comments.

Former NBA player and commentator Jay Williams said on social media that Irving “could have gone about it a different way” but he was not anti-Semitic and was being held to a higher standard than many white celebrities.

He cited examples of comedian Sarah Silverman doing blackface, broadcaster Howard Stern using the N-word, and former NFL quarterback Brett Favre, who is being sued by the state of Mississippi over his connection to the alleged misuse of millions of welfare dollars.

Favre denies any wrongdoing, saying he did not know money being used to upgrade facilities at his alma mater, the University of Southern Mississippi, was meant to go to needy families.

“They apologise and the rest of the world moves on,” Williams said of the cases of Silverman, Stern and Favre.

“We’ve been told that’s how the process works. Somebody does a blackface [and people say], ‘It was a misunderstanding, we got it, OK’.

“Is that person really racist? Probably not. Was it ignorant? Probably so. OK, we understand it, we move forward. We don’t like it, we would love to hold them accountable.

“But what we feel like happens with Kyrie is, even after an apology, it’s not enough. We feel like there needs to be more.”

Irving has met with NBA commissioner Adam Silver, who is Jewish, and Silver said he has “no doubt that he’s not anti-Semitic, but I think there’s a process that he’s going to now need to go through”.

He has not played for the Nets since a November 1 loss to Chicago.