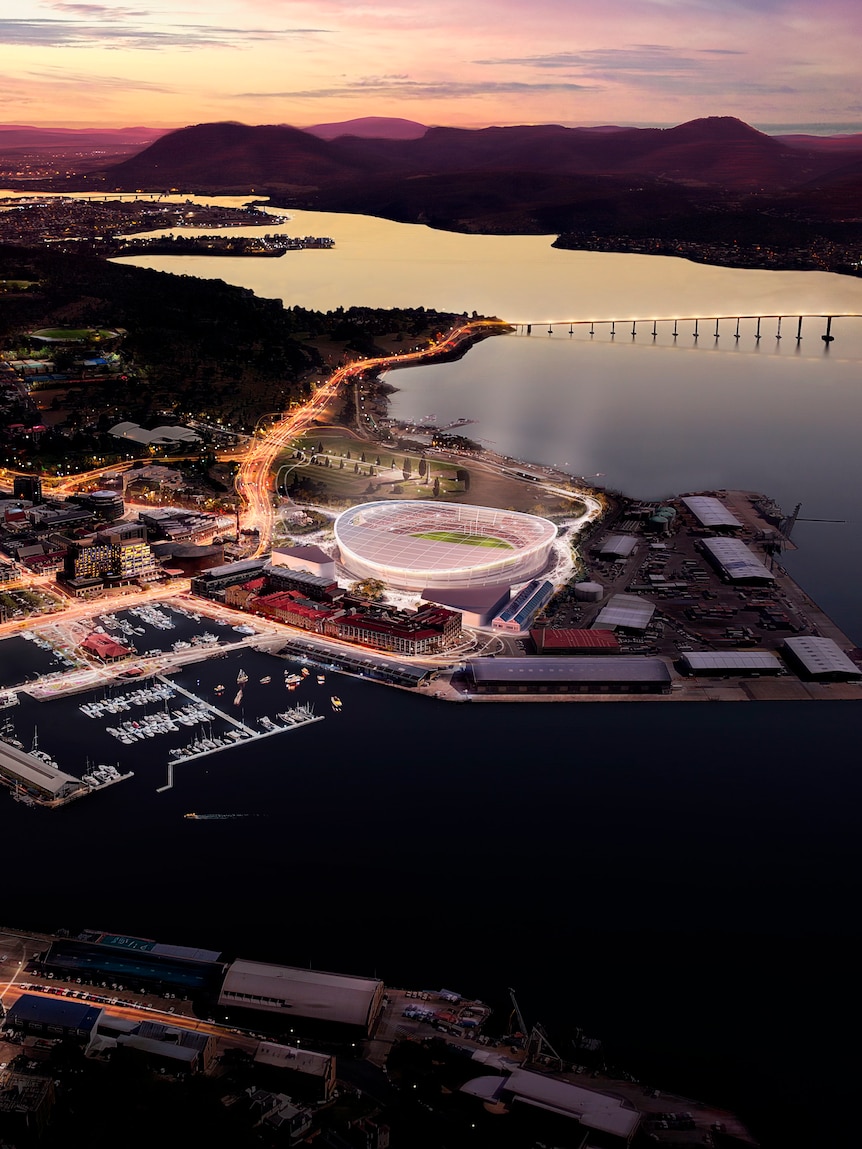 Tasmanian Premier Jeremy Rockliff has launched a vigorous defence of his plans to spend an estimated $375 million on a new Hobart stadium as his government faces growing political pressure from all sides.

Last week, the government announced it had reached an in-principle commercial agreement with the AFL for a Tasmanian team, indicating that broad costings had been agreed to.

The agreement also includes the proposal for a roofed stadium at Hobart’s Macquarie Point, estimated to cost $750 million and requiring contributions from the federal government and private sector.

This aspect has proven to be the most politically challenging for the state government, with criticisms including the willingness to accept AFL boss Gillon McLachlan’s demand for a new stadium at all costs, despite the state already having two AFL-standard grounds.

Mr Rockliff took to his Facebook page yesterday to get on the front foot, following his meetings with Mr McLachlan last week.

He attempted to correct “common mistruths”.

“To be perfectly honest with you all, I’m sick of it.”

The first common criticism was that money would be diverted from health and housing to fund the AFL team.

Tasmania’s health system is continuously under strain, and the priority homelessness list has grown consistently for years, but Mr Rockliff believed these areas were being addressed.

His second comment addressed the issue of York Park and Bellerive Oval, describing how the Launceston ground would also be receiving major upgrades to host AFL matches as part of the bid.

He said if Bellerive Oval in Hobart were picked to be the main AFL stadium, it would need more than $100 million in upgrades, but even then would always have transport and accommodation problems.

His other points related his view that the $375 million initial state government contribution was affordable due to the economic stimulus an AFL team would bring, and that AFL would continue to be played in the north of the state.

Responses to the Premier’s Facebook post ranged from support for the stadium as a “good use” of the Macquarie Point site to complaints that the money “would be better spent in other necessary areas such as health, roads and infrastructure”.

The stadium question has always lingered in the background to discussion about the island state getting its own AFL team.

Former premier Peter Gutwein then announced a proposal for a stadium at Regatta Point during his state of the state address in March, prior to his resignation.

The proposal has since shifted next door to Macquarie Point, with the latest early concept designs showing it abutting the historic Hunter Street precinct.

The stadium presents a range of political problems and opportunities, some of which are typical for Tasmania, while others are unusual.

The Liberal Tasmanian government will need a substantial contribution from the federal Labor government to get it off the ground.

The stadium itself sits in the electorate of Clark, held by independent Andrew Wilkie on the second-largest margin of any lower house seat. He has described the proposal as “an appalling use of taxpayers’ money”.

Federal Labor has been waiting for a solid proposal for it to consider, before stating its position either way.

Discussions are believed to be underway, and a final business case is likely to be presented to the federal government within months.

In the meantime, the federal Liberals have raised serious concerns.

In an opinion piece in the state’s northern newspapers, Tasmanian Liberal senator Jonathon Duniam said the AFL was being “unfair” in its demands for a new stadium.

“Tasmania is being asked to choose — between health and footy. Between roads and footy,” he wrote.

Senator Duniam stopped short of criticising his state Liberal counterparts, but attempted to wedge federal Labor, should it agree to fund the stadium.

With Tasmania’s two northern seats of Bass and Braddon usually in play at election time — and both held by the Liberals — there are clear political benefits in opposing the stadium, which is likely to be an unpopular project in Launceston and Burnie.

State Labor is also looking for some of that political capital, and likely sees the stadium issue as one of its clearest paths to victory in the 2025 state election. By then, the issue could have intensified, with seats to be gained in an expanded lower house.

Get Tas alerts on the ABC News app

Here are the steps to get breaking news alerts on the latest Tasmanian stories directly to your phone.

State Labor’s economic development spokesperson Dean Winter said there was a clear divide between the Tasmanian and federal Liberals.

“Senator Duniam has today doubled down, putting the Premier on notice that his second Hobart stadium project is the wrong priority for our state,” he said.

“It is effectively a no-confidence motion in the Premier from the Tasmanian federal parliamentary Liberal Party, perfectly timed to hurt him at the start of his final parliamentary week.”

For the AFL’s part, these political problems are a side issue.

Mr McLachlan said major stadium projects in Adelaide and Perth faced similar opposition, but he believes the benefits were obvious.

He said everyone would get on board.

“We need bipartisan support, we need federal support, and we’ll talk to them. We need public support, and we mostly have it, but we’ll get all of that too. And of course, we need corporate support,” Mr McLachlan said.

Set the ABC News website or the app to “Tasmania Top Stories” from either the homepage or the settings menu in the app to continue getting the same national news but with a sprinkle of more relevant state stories.

Here’s a taste of the latest stories from Tasmania: