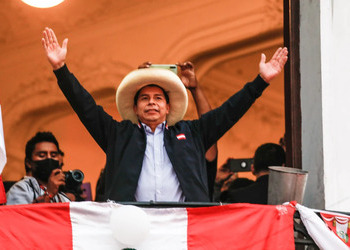 Peru’s former President Pedro Castillo is both unoriginal and unique.

Unoriginal in that he is the sixth president in six years and one of several to face allegations of corruption. Unique in that he is the first to face an investigation by the Attorney General’s Office while still president and to try an apparent coup d’état to stay in power.

After a tumultuous 24-hour period in which Castillo attempted to dissolve Congress and rule by decree before promptly being removed from office and arrested, he is facing potentially serious charges.

Some of the charges are new, including a count of sedition announced by the Attorney General shortly after his arrest on December 7. Most date to earlier this year when an investigation was first opened into Castillo for criminal organization, influence peddling, and collusion.

This marked the expansion of an inquiry that had seen Castillo’s former minister of transport and communications, Juan Silva Villegas, arrested and six congressmen placed under investigation.

SEE ALSO: Corruption at Every Level: Who Profits from Destruction of Peru’s Amazon

Castillo and Silva Villegas allegedly ran a corrupt network of officials within the Ministry of Transport and Communications (Ministerio de Transportes y Comunicaciones – MTC), which illegally controlled the tender for the construction of the Tarata bridge in northern Peru. This public works contract was apparently given to Peruvian and Chinese companies close to the former president in exchange for bribes.

In parallel, Castillo also faces an investigation into his alleged role in influencing Peru’s state-owned oil company, PetroPerú, into buying biofuel from a petroleum company, Heaven Petroleum Operators. The owner of said company, Samir Abuyadeh, was arrested in November and maintained he met with Castillo twice at Peru’s presidential palace before the deal went through. Castillo has denied this.

Finally, Castillo is alleged to have helped award public works contracts worth $8.6 million from the Ministry of Housing and Construction to contractors connected to his family and friends.

Four of Castillo’s direct predecessors all face or have faced charges related to corruption in public works contracts connected to Brazilian giant, Odebrecht. Castillo does not appear to have learned any lessons from this.

Alejandro Toledo, president from 2001 to 2006, stood accused of money laundering and criminal conspiracy for receiving up to $20 million from Brazilian construction giant, Odebrecht for being granted contracts to build sections of Peru’s Southern Interoceanic Highway. He is currently in the United States, but Peru has demanded his extradition. Toledo was the first of four presidents to be accused of corruption related to Odebrecht.

His successor, Alan García, who ruled Peru twice from 1985 to 1990 and 2006 to 2011, committed suicide in 2019 as police came to arrest him for his alleged role in the same Odebrecht scandal. The level of bribery he was reportedly involved in was staggering, having received up to $143 million and used around $29 million to bribe other officials to favor Odebrecht over three different governments.

Former President Ollanta Humala, who governed Peru from 2011 to 2016, is accused of receiving around $3 million from Odebrecht in exchange for granting the firm public works contracts. After a period under house arrest, he was released, but his criminal trial began in early 2022.

Finally, Pedro Pablo Kuczynski, who governed as president from 2016 to 2018 and had been prime minister under Toledo from 2005 to 2006, was sentenced to three years under house arrest in 2019. He was found to have helped facilitate contracts for Odebrecht to build the Interoceanic Highway and a hydro-energy project in Peru.

Astonishingly, while Castillo has had no connections to the Odebrecht scandal, he appears to have run very similar schemes within government to those which his predecessors were brought down for.

Giving contracts to friends; taking bribes for public works; naming officials who supported his schemes; firing those who noticed the irregularities. For all his electoral bluster about being a political outsider, his reported crimes once in office look to have been as run-of-the-mill as they come.