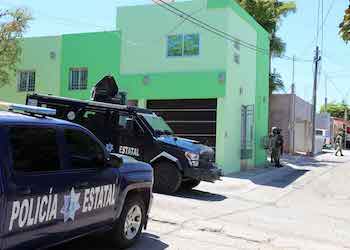 Despite being locked in fierce competition over control of a wide array of criminal economies, Mexico’s two most powerful organized crime groups are reportedly sourcing precursor chemicals from the very same suppliers to produce fentanyl.

The companies — Corporativo y Enlace Ram, Corporativo Escomexa, and Grupo Pochteca — allegedly imported key substances like 4-Anilino-N-phenethyl-4-piperidine, propionyl chloride, and aniline from India and other Asian countries. These often arrive in Mexico at major ports like Lázaro Cárdenas in Michoacán and Manzanillo in Colima.

SEE ALSO: Mexico’s Role in the Deadly Rise of Fentanyl

After being imported, it’s not clear how sales were arranged to both crime groups. The Attorney General’s Office has reportedly opened investigations into each company for selling these chemicals while operating under the façade of software distributors and beverage manufacturers, among other fronts, according to Milenio.

Synthetic drug production often takes place in clandestine laboratories in states like Michoacán and Sinaloa before the final processing stage, which can occur in warehouses and residential homes within major cities.

As of mid-October, members of Mexico’s Marines, army, and National Guard had dismantled more than 1,000 clandestine drug labs nationwide since President Andrés Manuel López Obrador took office at the end of 2018. A large share of these have been uncovered in Sinaloa.

There are a couple of takeaways from reports that both the CJNG and Sinaloa Cartel are sourcing precursor chemicals from the same companies.

First, this dynamic suggests that the market for illicit fentanyl in the United States — the primary destination of Mexican production — has become so large that both groups can earn enough profit without needing to secure a monopoly over the chemical suppliers needed for production.

To be sure, fentanyl is now by far the leading driver of the ongoing opioid crisis in the United States. In some regions of the country, it has shifted from a supply-side driven phenomenon to one that is now propelled by demand.

In 2020, drug overdoses involving powerful synthetic opioids like fentanyl killed around 72,000 people, according to data from the US Centers for Disease Control and Prevention. Seizures of the drug on the US-Mexico border have more than tripled in the past two fiscal years as well.

Second, the report shows how Mexican crime groups exploit weak points in the regulatory efforts of authorities in legal industries to facilitate the production of illicit drugs. This is a complex task, as chemical suppliers in source countries like India and China are very often legitimate companies producing these substances legally.

Indeed, national governments are often playing catch up when it comes to banning the production and imports of certain chemicals known to be used in synthetic drug production. When one substance is placed under international control and made illegal, chemical compounds can easily be altered to create new, unregulated analogs and precursors that effectively perform the same function.

Front companies like those uncovered in Mexico can easily import the small quantities crime groups need to be diverted for production by mixing them in with legal products or mislabeling them altogether.